The Swedes do have access to foreign media, so one would expect to see more mask wearing in Stockholm.  In the neighboring countries, where mask wearing has been promoted as a way to protect yourself and others, a majority of people have continued to wear masks – as a personal choice – even when they are no longer officially recommended.  In Sweden, wearing a mask is considered criticism of the official policy and unpatriotic.  And, when local authority figures get overly eager to comply with the National Public Health Agency,  forbidden:

Like this 13-year-old in Stockholm, who was sent home from school for wearing a face mask.

Despite all the evidence to the contrary, the Swedish Public Health Authority will not admit that they have been wrong.  The official line is still repeated in the Swedish media; it is by now so ingrained, that it is thrown in text without much thought. Like this line line, from the TT Wire published by the Swedish Public Broadcasting (SVT) October 21, 2021 (Full text at the end of this page)

…The theory [that poor compliance with recommendations to wear face masks in public transport might be a factor in increased infection rates in the UK ] does not hold, however, as Sweden has a significantly lower spread of infection and fewer deaths, despite the fact that in principle no one uses masks here.

It would be easy to blame me for taking this out of context.  The context, presumably, is the narrow time frame in October 2021, just before the number of cases will start to rise again. In the text, that context is not mentioned.

If one reads the above article, without expressly being aware of the presumed context, these are the points it drives home:

2) The official narrative that there is no research to support public wearing masks.  Or, as FoHM put it:  ”To run around town with a small rag that gets wet, that it works, there is not much evidence for”.

The point has been embedded in a way, that makes it  difficult to highlight it  in the text without rearranging.  But the message is clear: The theory that masks protect from infection does not hold.


The repetition of the official line has created a collective narrative, evoking public intolerance against those who otherwise might choose differently.  The very wording used by the Public Health Agency: “To run around town with a small rag that gets wet” already ridicules anyone who might be of a different opinion.  Consequently, the Swedish public considers mask wearing not only unnecessary, but an act defiance. Sweden is a hierarchical and conforming society  – If a a figure of authority cues the masses to ridicule and harass someone who does not confirm, they will do so.

It is often pointed out by the Swedes, that the Swedes are let to make their own decisions.  That, again, is the national narrative.  In practice – it works for as long as the decisions they make are the ‘right ones’. If someone makes an individual choice to wear face mask in public, they will need to be prepared to be ridiculed, and to be met with hostility. As reported in Business Insider:

“I have had people laugh and point at me, people screaming, ‘You should lock yourself at home if you are so scared of corona,’ people coughing in my direction and then laughing and saying: ‘Corona! Corona!'”

“what was horrid, though, was the catcalls and the nasty comments, people laughing at you openly in the stores.”

This has partly to do with the way ‘The Swedish Way’ has been hammered into the national consciousness since the onset of the pandemic. In Sweden, the mask wearing people are traitors.  Especially since the Swedish Way turned into humiliation, as it became clear that Sweden was the only country in the region that had failed. Then it became a question – are you a mask wearing Norwegian, Finn, or Dane, or are you one of us.  As one of the locals put it:

The TT article does not make clear who said “The theory does not hold…”.  There is a researcher quoted, but that was in the previous paragraph. It is unclear if the same goes for this paragraph. Or if this is something the journalist added, doing his patriotic duty.  It would be a Very Strange Thing for a researcher in microbiology to draw such conclusions based on anecdotal parallels of two very different societies and situations, when there is plenty of scientific research that differs.  But,  we should never underestimate the power of needing to confirm in Sweden.

Reading the Swedish Covid-19 coverage often reminds me of the old Soviet-era historical documents, where in frequent intervals the editors felt that they had to  inject passages like  ‘This shows us how the Imperialistic Oppression…’

It is ironic, that in an interview with the Danish National Broadcasting (DR), Anders Tegnell on March 20 accused the Danish government of “putting political considerations before the scientific ones”.  Today, a year and a half later, we can see how the Swedes have politicized Covid-19 as far as it goes, ignoring and refuting all science that does not support their politics, with a the cost of over 15,000 lives.  What is worse, these national politics have been decided not by elected politicians, but by a couple egos at the Swedish National Public Health Authority.

“Sweden has a significantly lower spread of infection and fewer deaths [than the UK]” does not hold.  Deaths in Sweden are somewhat lower, BUT – they are decreasing in the UK while the trend is growing in Sweden.  As to the Number of cases, UK and Sweden are clearly in different phases.

If 2020 is an indication, the cases in Sweden should start growing in November-December.   Unrelated issue, that I was not aware of before plotting these graphs:  At the moment UK has much higher number of cases than Sweden, while the number of deaths are only marginally different.

The full text of the TT Article:

SVT: The British are hard hit by Covid-19 – Again 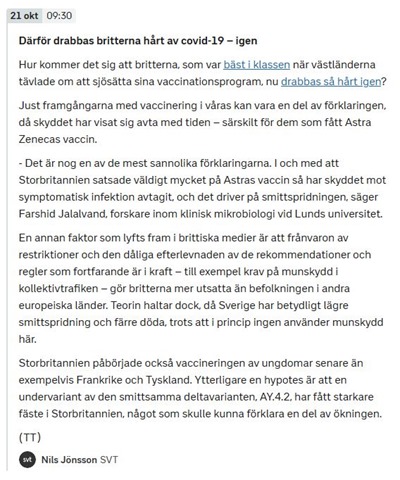 “How is it that the British, who were best in class when Western nations competed to launch their vaccination programs, are now hit so hard again?

The success of vaccination this spring may be part of the explanation, as protection has been shown to diminish over time – especially for those who have received Astra Zeneca’s vaccine.

– That is probably one of the most probable explanations. As the UK has invested heavily in Astra’s vaccine, protection against symptomatic infection has diminished, and this is driving the spread of infection, says Farshid Jalalvand, researcher in clinical microbiology at Lund University.

Another factor highlighted in the British media is that the absence of restrictions and the poor compliance with the recommendations and rules that are still in force – such as requirements for masks in public transport – make the British more vulnerable than the population in other European countries. The theory does not hold, however, as Sweden has a significantly lower spread of infection and fewer deaths, despite the fact that in principle no one uses masks here.

The United Kingdom also started vaccinating young people later than, for example, France and Germany. Another hypothesis is that a sub-variant of the contagious delta variant, AY.4.2, has gained a stronger foothold in the UK, which could explain part of the increase.”