While the world is testing, tracking and tracing coronavirus infections, the Swedes were surprised to find that they seem to have lost that battle before it started.  Just as Sweden had reported their first covid-19 death, and 136 cases for the day, the Public Health Authority (FoHM)informed about their “New Strategy” :

On the day of the announcement, Sweden reported 158 confirmed Covid-19 infections.  The total number of people infected grew from16 the week before to 620.

That is about the expected growth rate this early in the epidemic, and about average for the region.  What is different about the Swedish numbers, however, is that compared to the neighboring countries, the growth rate for Sweden is and even exponential, and steadily increasing.

This suggests that Sweden has only been testing people who are already sick, while other the other Nordic Countries have been testing to track the chains of infection – testing even healthy people who have been exposed, and catching clusters of contamination.   Tegnell’s comment about how it until now has been important “to know exactly how many are infected in Sweden” suggests, that the ‘Old Strategy’ of FoHM has been to tally the number of infected in Sweden, rather than to keep track of and to trace the chains of infection.  This gives us the reason to believe that there is a much more widespread contagion in the society than what we know of.  Something FoHM seems to be aware of:

There is no point trying to track-and-trace an infection that has already widely spread, and that already is everywhere.  That is where we are in Sweden today.  Picking out individual infections in infected communities would only be waste of the resources that can be put to better use elsewhere.  The ‘Change of Strategy’ does seem like the right decision, but only because it is the only option. 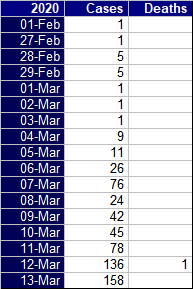 With testing for community infections no longer done, the only means to estimate the infection rate in Sweden would be by a survey.  At this stage, when the number of infections is increasing exponentially and the actual situation changing daily, that would be a waste of resources.

From now on, Sweden is left with only  the lagging indicators, having to try to estimate the spread of the infection from the number of people being hospitalized and the number of  people dying, once those numbers will have started to grow. Until they do, Sweden will be in the dark.